Consensus is one of the fundamental problems in distributed systems. We want clients to perceive our system as a single coherent unit, but at the same time we don’t want to have a single point of failure. We need to have several machines collaborating in a way that they can all agree on the state of the world, even though a lot of things can go wrong. Nodes can crash, messages can be delivered out of order or not be delivered at all, and different nodes can have a different idea of what the world looks like. Making a distributed system behave like a coherent unit in face of these failures can be a challenge, and that’s why we sometimes need a consensus algorithm, like Raft, that gives us some guarantees about the properties that we can expect of this system.

Raft is a consensus algorithm that was created with the goal of being understandable. This is a direct response to Paxos, which is probably the most well-known algorithm in this space. Paxos solves the same type of problem, but it’s a fairly complicated algorithm, and Raft promises to give us the same guarantees, while being a lot simpler.

Raft works by keeping a replicated log. This log is an append-only data structure where new entries are added, and only a single server, the leader, is responsible for managing this log. Every write request is sent to the leader node, and this node will distribute it to the follower nodes and make sure the client receives a confirmation for this write just when the data is safely stored. Let’s get into the details.

The consensus problem is divided into three sub-problems: Leader election, Replication and Safety.

Every node will always be in one of these three states: Leader, Follower or Candidate, and we should never have more than one leader at the same time. Time in Raft is divided into terms, which is basically an arbitrary period of time, identified by a number that is sequentially incremented.

A server always starts as a follower, and it expects a heartbeat from the leader. The follower will wait for this heartbeat for some time (defined as the election timeout), and if it does not receive it, it will assume the leader is dead and transition to the Candidate state. After it goes to this state, the first thing it will do is to vote for itself, and then send a vote request to all the other nodes (this request is an RPC called RequestVote). If it receives a confirmation for this request from the majority of the nodes in this cluster (e.g. 3 out of 5), it transitions to the Leader state.

There are some interesting things that can happen here, though, and it’s where Raft’s focus on understandability becomes apparent.

First, if all nodes start at the same time, they would all also timeout at the same time, meaning every node would trigger this same RequestVote RPC, making it a lot harder for a single node to obtain the majority of the votes. Raft mitigates this issue by using a randomized election timeout for each node, meaning one of the followers will usually timeout before the others, likely becoming the new leader.

Even having this randomized timeout, we can still have a split vote situation, where none of the nodes have the majority of the votes. For example, in a cluster of 5 nodes when the leader dies we would end up with 4 nodes, and if 2 of these nodes timeout roughly at the same time, each one could get 2 votes, so none of them can become the leader. The solution is as simple as it can be: Just wait for another timeout, that will most likely solve the issue. When this timeout happens and the term doesn't have a leader, a new term will be initiated, and each node will have a new random timeout value for the next election, that is probably not the same again. We will have a performance penalty because of that, but this timeout is usually just a few milliseconds, and a split vote situation should be quite rare.

This is the part that we really care about: How to keep this replicated log.
After we have an elected leader, every request is sent to this node. If a follower node receives a request it can just redirect it to the leader or return and error to the client, indicating which node is the leader.

When the leader receives a request, it first appends it to its log, and then send a request to every follower so they can do the same thing. This RPC is called AppendEntries. Although the message was appended to the log, it was not committed yet, and the client didn’t get a confirmation that the operation succeeded. Just after the leader gets a confirmation from the majority of the nodes it can actually commit the message, knowing it’s safely stored, and then respond to the client. When the followers receive the next heartbeat message (that is just an empty AppendEntries RPC) they know they can also commit this message.

Other than the command sent by the client, each log entry also has a term number and an index. The term just defines a unit of time (and, remember, each term has no more than one leader), and the index is the position in the log. Let’s understand why recording these two values is important.

To ensure that every log is correctly replicated and that commands are executed in the same order, some safety mechanisms are necessary.

Raft maintains the Log Matching Property property, that says that if two distinct log entries have the same term number and the same index, then they will:

As the leader will never create more than one entry with the same index in the same term, the first property is fulfilled

When the nodes are operating normally, these logs will always be consistent. When a leader crashes, though, this log can be left inconsistent, and that’s when AppendEntries’s consistency check will help us. Imagine this scenario:

- If N2 tries to replicate the message term=2; index=3; command=z to N3, the consistency check will reject this message, as the highest committed index (3) is not present in N3’s log;

- N2 will then go back in the log and transmit all the entries after the latest entry present in N3, making the logs consistent again.

This property guarantees that a candidate will never win the leader election if it does not have all the committed entries in its own log. As an entry needs to be present in the majority of the nodes to be considered committed, when an election is taking place at least one node will have the latest committed entry. If a follower node receives a RequestVote RPC from a candidate that is behind in the log (meaning a smaller term number, or same term number but smaller index), it will not grant its vote to this candidate.

In the example above we have three logs, each entry represented with the term number in which it was created.
In this case, Node 1 was the leader, and was able to commit up to index 5, where it got a confirmation from the majority of the nodes (itself and Node 2). If Node 1 dies and a new election starts, maybe Node 3 can be the first to transition to the Candidate state and try to become the leader. This would be a problem, as its log does not have the latest committed entry (term 3, index 5). When it sends a RequestVote to Node 2, this node will notice that its own log is more up to date than Node 3’s, and therefore will not grant its vote, making it impossible for Node 3 to become the leader.

There are a lot of details left out in this post, so I really encourage you to check out the entire Raft paper, which is quite readable. There’s also a Raft website with a lot of resources, including implementations in several different languages. This Raft visualization also helps a lot to understand how the leader election and replication works, going step by step and explaining everything that is happening, even though it will not cover every scenario described in the paper.

And this is a great lecture by one of the authors: 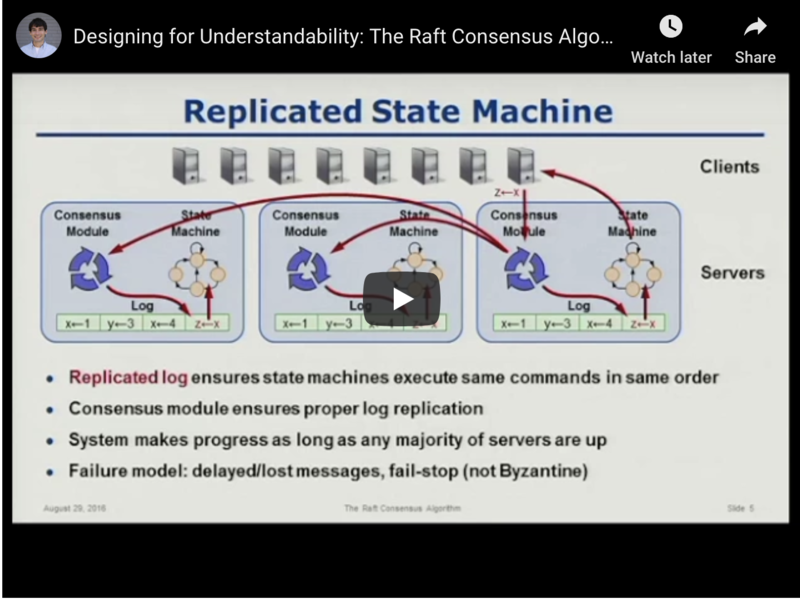 Brian Storti joined AlphaSights in July of 2015 and serves as a software engineer.

Five Reasons You Should Consider a Career in London

How To Be a Successful Transcriptionist: Tips & Tools

Drive Your Career Through Digital Learning