Hassan: Teamwork on and off the Field

Alright, so we’re not professional athletes, but the AlphaSights FC team is not too shabby. To celebrate the FIFA World Cup, we sat down with Hong Kong’s Hassan Nasser to shed light on the office’s four-year old team and how that has influenced his experience at AlphaSights.

Can you tell us about yourself and your role at AlphaSights?

I grew up in Hong Kong then spent three years at university in cold, rainy Manchester, UK and very quickly decided to move back home to warmer climates. After brief stints in financial research and insurance sales, I joined AlphaSights in October 2013. Over the last five years I’ve had the opportunity to work with people from all over the world — at one point you could hear any one of 14 languages being spoken around the office! Nowadays I keep myself busy focusing on scaling our team and looking for opportunities to improve the way we serve clients.

What is AlphaSights FC and who started it?

Charlie Sutherland, our Regional Head, used to say that his first target when he started the Hong Kong office was to have enough people to start a football/soccer team. By the summer of 2014, we finally had enough to form the nucleus of a team that was brimming with potential! Our first couple of seasons ended up being a ‘learning experience’ as we realized there were quite a lot of decent teams floating around Hong Kong. And perhaps we weren’t one of them yet.

What led you to organize this team?

After our first few seasons the original league we joined closed down so we went a year or so without playing a game. After a while we missed the experience so I eventually found the league we currently play in — ‘Power Soccer HK’. I think we all wanted to get back to playing some kind of sport because, regardless of the results, it was always great fun to have a bunch of us get out of the office and have another place to bond and showcase our competitive spirit. I’ve always loved the camaraderie that football built up so I was more than happy to take on the organizing.

I’m the current goalkeeper for AlphaSights HK — a position I’ve held with pride for the last four years (I’m assuming it’s because it’s the only position no one else wants!). We tend to play against other corporate teams in hour-long games on Thursday nights. We’ve come up against a number of worthy opponents including teams from different banks and even some Hong Kong icons like the Jockey Club.

What’s challenging for you and your team?

A big one is consistency in our performance. We’ve had games where it feels like we’re reading each other’s minds, and others where it’s seemed like we’ve only just met. It just goes to show how important it is for teams to be on the same wavelength in order to succeed in any context. Naturally, the more time you spend getting to know each other’s strengths and weaknesses the better you are at leveraging them on game day.

Does engaging in team sports contribute to your own work? If so, how?

100%! I was first surprised at how many skills you can truly take from team sports to building professional teams and vice versa. Two of the most transferable skills I’ve gained through sports are communication and trust-building. Through my time at AlphaSights, I’ve worked with a number of teams spread across geographies and cultures and I’ve relied heavily on lessons from sports to make those teams as cohesive as possible.

Does it affect the office at large?

One of the major benefits to the office environment is that there are more relationships that exist through the football team. As we’ve grown in size, it’s been harder to get to know everyone who joins the firm. 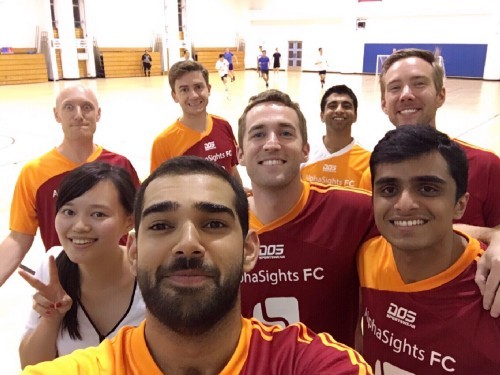 The team has given me the chance to build memories with newer joiners with whom I may not have had much exposure to. That’s something that I value a lot and I think it helps drive the #onefirm spirit.

Transitioning to In-House Recruitment Role from An Agency

Five Reasons You Should Join the Lateral Recruitment Team at AlphaSights

Transitioning from Transcriptionist to Quality Assurance Manager at AlphaScribes